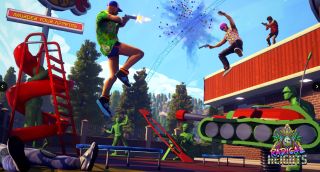 Radical Heights is, by the sound of the team's time with it, a fun battle royale game that's very rough around the edges, which means it'll take a lot of patches to get it up to standard. The second of those patches arrived this week, bringing with it a new gadget, improved character customisation, and BMXs that won't flip out every time you so much as bump over a curb.The new gadget is a scanner that temporarily shows the location of enemies within a "large" radius on your minimap. The blips won't move around as your enemies do—it'll just display their last known location after you put the scanner away, but it'll be a good way to find out roughly what area they're in. One of the team's criticisms of the game was that rounds evolve too slowly, with a big lull in the middle, and being able to see where your enemies are should help address that by making firefights more likely.The update also adds bike ramps for you to fling your

Submitted 22 minute(s) ago by swapnilbhosale369@gmail.com

Submitted 1 hour(s) ago by jakemillions How To Make WhatsApp Voice or Video Call with Google Assistant - theprimetalks.com

Submitted 2 hour(s) ago by theprimetalks Submitted 16 hour(s) ago by theprimetalks