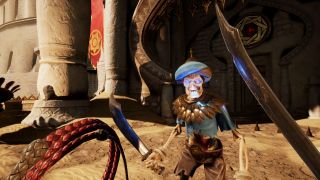 City of Brass puts me in mind of a 3D, Arabian Nights-themed version of Spelunky. As you sprint through its shiny, procedurally-generated metropolis you'll grab treasure, buy items, lay traps, whip enemies and slash your scimitar, avoiding permadeath at all costs. It's been in Early Access for just under a year and now it's out on Steam, with the 1.0 update adding the final boss fight.As you'll see in the trailer above, your whip is perhaps the most important part of your kit. It knocks enemies back to create space and you can use it to grab onto bits of the environment, pulling yourself across gaps or out of danger. By the looks of it, you can upgrade it to add different effects, making it freeze enemies or set them on fire. Presumably that will be controlled through genies, who will barter for goods or grant you wishes to boost your powers.Unlike Spelunky, however, you won't have a lot of time to think in City of Brass. You're running against the clock, whic Submitted 14 hour(s) ago by theprimetalks

Metal Forming Market for Automotive Worth $202.2 Billion by 2025 - Exclusive Report by MarketsandMarkets™

Submitted 22 hour(s) ago by swapnilbhosale369@gmail.com