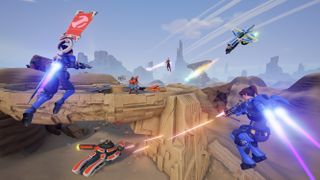 Midair is a 16v16 FPS where everyone has a jetpack to blast and a base to defend, and it fully embraces the hill-hopping 'skiing' that made games like Tribes: Ascend so fun. It's been in Early Access since August 2017, but as developer Archetype announced, today it's officially launching on Steam as a free-to-play game. As we learned when we spoke to Archetype CEO Chris Matthews at PAX West 2017, Midair seeks to improve on Tribes' monetization model, which left some players feeling cold. "We want players to be able to jump in and have fun without needing to pay money to get the best weapons or abilities," its Steam page reads. "For free-to-play users, we will have a progression system that does require the user to move their way up a progression ladder and unlock items related to gameplay."Archetype also offers a $30 'Progression Pass' which unlocks "everything gameplay." Basically, if you don't want to unlock stuf

Submitted 3 hour(s) ago by acserviceexperts

Submitted 3 hour(s) ago by swapnilbhosale369@gmail.com The Chi Season 3 - On Feet Nation

Submitted 5 hour(s) ago by tvseriesonline67 Submitted 19 hour(s) ago by theprimetalks Submitted 20 hour(s) ago by theprimetalks